Emma Palova, (Konecna) was born in former Czechoslovakia. She is a Lowell-based author, short story writer, novelist, screenwriter and a journalist. 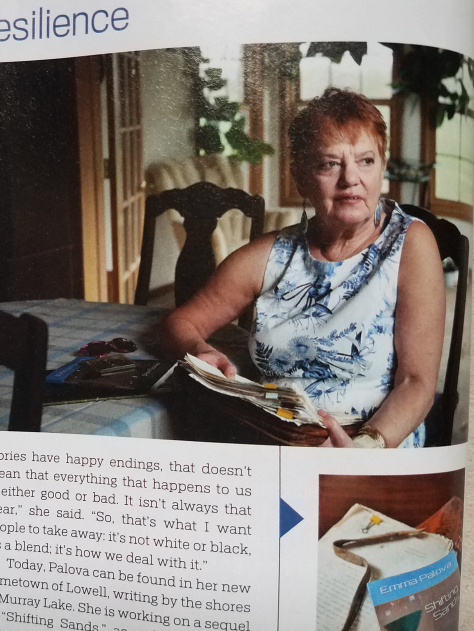 Photo by Johnny Quirin, featured in the Grand Rapids Magazine, 2018.

Palova wrote for Czechoslovak Newsweek and Prague Reporter. She also taught English as a second language for Francophones and Somali, as well as for Russians in her homeland. She received bachelor’s degree from the University of Brno in 1986.

She started an eclectic collection of short stories during her studies of creative and journalistic writing at ICS in Montreal, and at the Grand Rapids Community College in Grand Rapids, Michigan. The collection “Shifting Sands:Short Stories” now in its first edition 2017 continues to grow with new stories. Many of these stories are based in the fictive Midwest town of Riddleyville, much like the screenplay “Riddleyville Clowns.”

The new collection “Secrets” in the Shifting Sands short stories series was published in July of 2019. Book 2 was launched successfully at the Lakeshore Art Festival in Muskegon on July 5th and July 6th, 2019. However, due to COVID-19 striking in March, the book never reached its marketing potential.

“My love for hometowns in Midwest America shows in the majority of my writings,” she said. “My current work is a tribute to small town characters and personalities.”

Palova is preparing the story of the family immigration saga that spans two generations, the “Greenwich Meridian Memoir” for the market. The target date for publication is Nov. 12,2020.

“The idea to write this memoir ocurred to me after the Ionia Sentinel-Standard ran a story about my naturalization in August of 1999,” she said. “I received congratulations from all over Michigan, since the Associated Press syndicated the story.”

During the National Novel Writing Month (NaNoWriMo), she will be working on the third book in the Shifting Sands Stories series: Steel Jewels.

“Writing and publishing as an authorpreneur is a very involved process. It’s like having a baby. It is a lifetime relationship,” said Palova. “It is also something that you cannot stop doing, no matter how hard you try.”

Palova has pursued journalism & photography throughout the years writing for hometown newspapers, regional magazines and on the WordPress platform.

“Small towns in Midwest America continue to inspire my work,” she said. “I find strength in my characters modeled after the resilient people in face of adversity. I love the Lake Michigan shoreline, its beaches and forests.”

The highlights of Palova’s journalistic, publishing  & entrepreneurial career include:

David Letterman presents story about 13-year-old Belding boy who delivered his sister in the bathroom of the family home.

About the feature photo; the logo was designed by graphic artist Jeanne Boss of Rockford along with both covers to the upcoming memoir and the third book in the short stories collection, Steel Jewels.