Lowell, MI- As I continued to delve into the memoir this morning, I realized that the immigration experience from former Czechoslovakia to the U.S. wasn’t just an escape from the communism trap, but also a quest for self-realization on both my dad’s part and my own.

But, for our partners, it was a sacrifice. 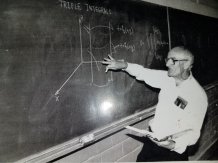 My dad professor Vaclav Konecny, who feared the religious prohibition set by the Marxist Leninist ideology, wanted to freely practice math in the U.S. without being afraid to go to church on Sundays.

“You can achieve any goal you set your mind to,” he said.

Dad has proven that dreams come true if you work on them, much like late president Vaclav Havel never gave up on freeing Czechoslovakia from the communist grip.

I followed my dream to publish a book after many detours en route to publishing; I have a pile of rejection letters from agents and a lot of pay stubs from jobs, I did not want to do. To this day, my dad is my constant inspiration, since he has never given up on anything. He is forever patient, kind and forgiving.

My other role model is Havel, who spent years in prison for fighting for democracy in Czechoslovakia.

Here is an excerpt from the chapter “Velvet Revolution.”

On Wednesday, Nov. 29, 1989 the Czech Parliament finally dissolved the article about the leading role of the Communist Party and the Marxism-Leninism monopoly on education.

It was a major victory since this article firmly anchored the dictatorship of the Communist Party and its ideology in the society.  According to the Marxist ideology, the official religion was atheism.

Under the old socialist regime, I had to take final exams from Marxism-Leninism in order to graduate from the Technical University in Brno in 1986. We had mandatory classes in Marxism-Leninism all four years of our engineering studies.

I remember those wicked Monday classes after getting off of a bus from a two-hour ride Zlin to Brno. One early morning, the professor came in with a black eye. He looked at us and explained pointing to his shiner:

“I was at Stork’s last night, we had a few beers and I talked about Lenin,” he said. “A guy at the next table got up and hit me.”

Stork’s is a historic pub located at the Grain Market near the Birthing Center. It was a great pub to study and do our homework, but not to talk about Lenin or Marx. Dads came there to give a toast to their newborn babies.

To be continued…Havel’s interview with the “Red Truth.”