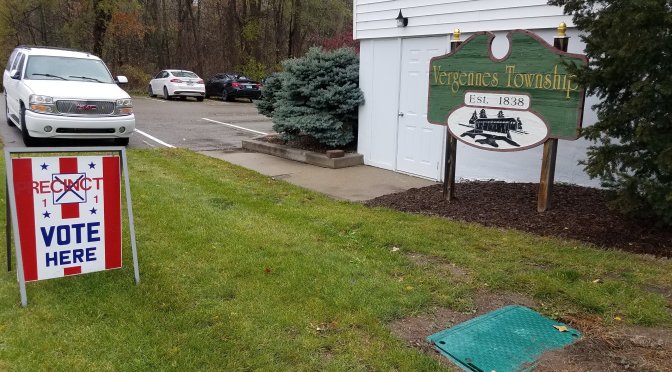 Lowell, MI- I wrote and I voted, equally diligent, and in that particular order. I am a morning writer. I get up early, do my yoga, walk on the treadmill and meditate to get into the writing zone.

In today’s meditation, I found out that news can be a potential stressor. The Wrimos (Writers and pep speakers) reiterated the same statement; stay away from TV during the 50K word marathon through Nov. 30. Our friend Dave T. suggested the same in the congratulatory letter to Ludek’s U.S. citizenship:

“All I can say is pay little or no attention to the ‘Cat Fights’ that are played out in the glut of political ads found on television! They are an exerci$e in how to wa$te million$ of dollar$ to make TV $tation$ rich!”

I did however like Google’s Go Vote encouragement instead of the usual doodles or caricatures.

After four hours of writing “The Writer, the Nun and the Gardener”, my inner editor kicked in and started questioning my thought process and my morals. I knew I had enough of writing and I headed out into the misty day to the polls.

I was voter no. 511 voting at Precinct 1 at the Vergennes Township Hall at 1 p.m. The ballot was crowded with state and county proposals. I was perplexed by the last question asking for funding of the early childhood program. How was it funded before?

I walked on the wet boardwalk from the township hall and put the “I Voted” sticker on my winter jacket before I lose it.

After I recorded my thoughts on how to end the story that doesn’t seem like a short story anymore on the banks of Murray Lake, I was relieved to do a little bit of website updating for Fallasburg.

Anyway, I logged in 13,050 words lowering the daily quota to 1,448 words. That’s still a lot of intense writing. I had to skip some of the motivational talks on Instagram in order fullfill the quota.

It is my clear intention to publish the anthology “Secrets” (c) 2018 Emma Palova as a direct product of #nanowrimo. It is a sequel to my first book “Shifting Sands: Short Stories.”

Here are excerpts from “The Writer, the Nun and the Gardener.”

Years went by faster than minutes on the clock on the wall, Sister Theophane went through more rigorous discernment. One Saturday afternoon, she decided to take a walk on the trails. She just followed the one that seemed familiar to her. There were the cherry trees on the left and the deer tracks on the right. The trail went a little up the hill and into another curve before the opening on top of the hill.

She stood by the bench under the big tree overlooking the rolling hills. The essence of that afternoon long time ago vaguely came back to her. Theophane could feel Kurt’s touch. She forgot completely what he looked like. They were too young back then to savor their memories.

Saddened by the moment, Theophane headed out on the trail looping back to the convent gardens. The gardening team was working along with other sisters. It was the Saturday work day. And the community was getting ready for another event.

Theophane was so immersed in her discernment and studies for the promotion, that she forgot what the event was.

“Mother, we have another 5K run coming,” said one novice. “Have you forgotten?”

Theophane looked into a distance bringing back that ominous 5K run many years ago.

“When is it?” she forced herself back into reality.

“In four weeks,” said the novice.

Theophane realized that by then, she would become the Mother of the Order. Karla passed away two months ago, and a directive came from the administration that Theophane will be taking over.

“You have only a few weeks to get ready for this important new service,” the note stated. “Don’t let your ambition get to you. Stay humble and pray.”

This time the ceremony was very private unlike the public final vows; no public was allowed. The chapel was full of other nuns and clergy.

Theophane kept her sister name. She learned to love and to respect it. From now on she would be leading the lively campus with many work teams. She would have to get acquainted with the team teams.

On a Monday, Mother Theophane went to introduce herself to the gardening team. As a girl she loved to garden. That all vanished with the increased requirements by the order.

“I want to express my deepest gratitude for your work that glorifies these gardens,” she said to the team. They bring so much joy to all of us.”

She noticed a tall tanned guy in the back.

One thought on “Day 6 #nanowrimo”