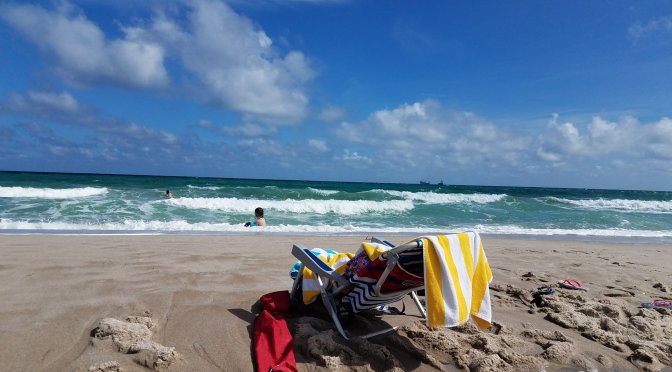 Lowell, MI – I am getting ready for my annual writer’s retreat in Florida. Each year in February, I head down south to the Gulf coast to get some sunny inspirations for my writings.

It has become a tradition since the late 2000s to visit with my parents, who winterize in Venice. Each year brings different insights; from dolphin sightings, chats with fishermen to encounters with beach painters and sand castle builders.

Two of my favorite memories are of course from the beach. I was walking on the beach, when French-speaking tourists asked me where is the west. The sun was just setting on the horizon to our right. So, I pointed in that direction.

The other one is from Sharky’s Pier. I walked on the pier boardwalk to watch the sunset.

It was getting increasingly dark in the orange glow on the Gulf side, but the shore was glistening in silver with the rising moon in the east. The contrast between night and day was striking much like the characters in my stories. Some are dark and shady from the very beginning like chief Will in the story “Chief” from my new book “Shifting Sands: Secrets.” Copyright (2019) Emma Palova. Other characters like manager Ricky go awry with time. Some characters shine bright throughout the story like the Belrockton matron Doris in the story “Silk Nora.”

Nature with its changing faces has always inspired me, as long as I can remember.

A heart and a cross made from sea shells overgrown by beach grasses is a close third runner up in the circle of inspirations.

“Start asking yourself questions,” one of my former editors said.

Many years later, I ask myself: “Who made that statement in the sand and for whom? How come it lasted?”

Then, there are golden nuggets from the Floridians who have never left sunny Florida.

“You mean to tell us there is snow on the ground in Michigan?” guys asked me in disbelief.

“Plenty of it. We have to stake the driveway for the snow plowing,” I said.

I am looking forward to chatting with my parents about out immigration saga, now spanning three generations.

I love yoga on the beach with Elin Larsen and hundreds of her followers. Her DVDs help me get through Michigan winters.

Excerpts from the “Chief”

And now this mess just before the holidays. In earlier years, he would light up to fight off the anxiety. He couldn’t even do that anymore. Nervously, he tapped his fingers against his thigh. He noticed he needed new pants.

Ricky in the meantime was staring blankly into the Monday rain on Main Street. The rain mixed with a few snowflakes, and his short drive to work was awful. And he wasn’t a good driver either. His strategy was as always to wait out until the other side spills out all the information putting him at the advantage. But this time it was taking longer than usual. Ricky was afraid of eating the whole pencil. Plus, he had a long day ahead of him with a meeting in the evening.

“I got a letter,” said the mayor pulling out a folded sheet of paper.

The mayor too knew how slick Ricky ​was from previous dealings​ with him. He decided to be careful this time.

“It’s about the chief,” he said softly.

Of course, Ricky should have known right from the get go that it was about the police chief. The other day when he was getting a haircut at Salon 111, he overheard a conversation from the neighboring chair.

That was another bad habit in his portfolio: eavesdropping coupled with gossip.[EP1]

“The chief was trying to change something in a file and he got caught,” said the cute redhead hairdresser leaning over the head of the lady in the chair fluffing her blonde hair.

“What was he trying to change?” the blonde raised her eyebrows looking at herself and at the redhead in the mirror.

Both of them stared into the mirror, as if the answer was inside that piece of glass.

Ricky rubbed his forehead, as he tried to chase away that scene from the salon from his mind. He knew it was going to be a long day and a long week in Riddleyville when the salons and the bars start buzzing with tidbits from the city hall.

“What about him?” Ricky looked up at the mayor. “He called in sick or what? I know it’s Monday and he worked the Ladies Night Out and the weekend. I don’t have a problem with him calling in.”

As always Ricky was trying to steer the conversation in his preferred direction.

“Somebody else can fill in for him tonight at the meeting,” he said. “I’ll take care of it.”

Lowell Area Historical Museum is awesome. It was Madame Framboise. And the story is cool.
Something borrowed #rftb
My slogan borrowed for 2023 is RFTB.
Stopped by @Ripple Restaurant in Lowell one last time.
Greetings from Big Rapids from Vas Konecny and Emma Palova.
Happy Holidays 2022