Note: Tthe Inspiring Communities series features men and women who inspire us in our communities to help other people achieve well-being in an increasingly complex world. Nominate a person who has inspired you.

Local businessman helps install water filters on Haiti, where water is the
Elixir of life

Lowell, MI- At the best, a running water system on the forgotten island of La Gonave off Haiti consists of a cistern tipped upside down with a hose that leads through the window inside a hut.

However, most often you will see a container full of dirty rain water known as the municipal well. The villagers haul water in buckets on donkeys or on their heads.
Usually when tested, the water is full of coliform bacteria, which causes cholera, according to Lowell resident and business owner Evert Bek.
Bek was part of a team that installed water filters in Haiti at the beginning of March. The project was spearheaded by the Lowell Rotary Club.
“There is no running water on the island,” said Evert. “There is no electricity, no bathrooms, people live in huts. They use rainwater collected in cisterns.”
The team installed 80 water filters which are cones filled with sand and stones from the local sources. Each dwelling paid 35 cents per water filter.
It takes 10 gallons of water to get the filters started before using as safe water supply, according to Bek. 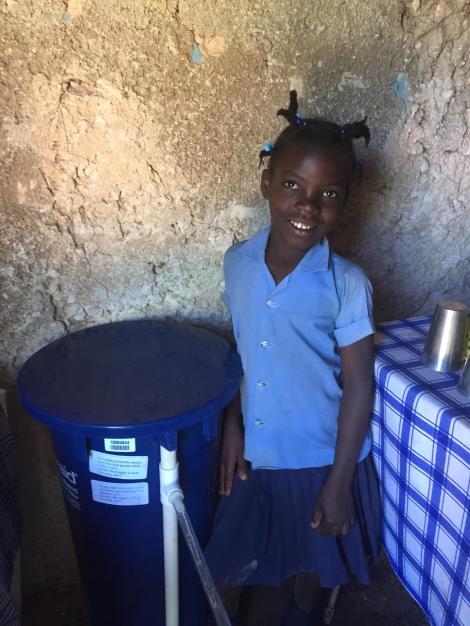 Bek was astonished at the living conditions on Haiti, located only 709 miles from Miami. Most recently, Haiti was hit by hurricane Matthew on Oct. 4, 2016, and the country still suffers in the aftermath of the devastating earthquake in 2010.
A typical dwelling is made of cement, it has a dirt floor, one room. And it accommodates anywhere from two to 10 people.
During the week-long stay, Evert said, he only saw meals cooking outside twice.
“One day we had beans and rice, the next day we had rice and beans,” he said. “The laundry is done outside by hand.”
Usually, the huts are scattered all around with a church as the center point. The team stayed in the village of Pikmi.
“We had to have a translator,” said Bek.
The island, which has no industry, was conquered by the French in the 1600s. The official language is Creole, which is a French African dialect.Their guide and translator was a self-taught man, who called himself Day Day. People use small motorcycles as transportation, but they mainly walk. It is not uncommon to see three to four people riding a motorcycle.Old pick-up trucks are left wherever, when they stop working.
The land is just clay and rock, because the top soil eroded as the forests were harvested unlike in the neighboring Dominican Republic.
“The island sits on a bare rock,” said Evert.
Approximately 100,000 people live on 287 square miles.
Weekly, there is a village market, where animals are traded. Charcoal on the island is used as a cooking fuel. However, there are no tools to fix anything.
In contrast to the overall living conditions, the population wears discarded t-shirts bearing losing sports teams’ logos, peddled by different organizations from the USA.
Kids and adults walk around with non-working phones.
“It’s a status symbol,” said Evert. “There is a lot of corruption in the country, you got to be ready to get your valet out to get anything done.”
Churches have done a lot of work on the island in schools and education. Kids go to schools in uniforms, and there are orphanages in good condition.
According to Evert, the big unknown remains the economy on the island even once the water problem is solved.
“You have water and then what?” he said.
There are a lot of unfinished houses on the island due to lack of materials and finances, and corruption.
A typical banker sits outside with a duffle bag of money on the corner of gravel streets. He holds dollars in one hand and Haitian Gourdes in the other hand.
If you go into a “store,” you will not get any change back.
“I learned the hard way,” laughed Bek.
The team stayed in a guest house with water and kitchen, leased through an organization based in Saranac.
“I like to help out,” he said. “Be grateful for what you have.”

Featured photo is of a Wednesday market on the Haitian island of La Gonave.

If you want to help contact your local organizations. This water filter installing project was through the Lowell Rotary club at http://www.lowellrotary.og

For more info on Haiti go to: https://en.m.wikipedia.org/wiki/Haiti