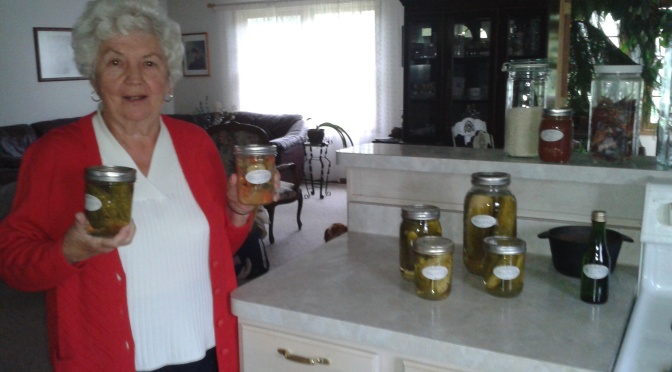 I will soon be opening a brand new virtual storefront on all Emma Blogs. I will feature Czech-inspired products such as the Palinka (r) line of canned products.

The products such as the sweet and sour dill pickles are all home-made from an old family pickling recipe. The secret recipe has been handed down from generation to generation.

My mother Ella Konecny pictured in the featured photo started canning in the USA during her second immigration in the late 1970s. She didn’t like the sour taste of American pickles or the color.

She would stand up and imitate our grandpa Joseph making a grimace from the sour taste.

“See they twist your mouth,” she said. “We have to start making our own.”

Ella most likely learned how to can from her own mother Anna.

Mom and dad still grow their own cucumbers for pickling. But the weather hasn’t been great for pickles. Ella is also the woman behind the brand name “Palinka.”

My husband Ludek and I are the third generation canning these goodies in our outdoors kitchen.designed for this purpose. Because as  the Czech saying goes, “Be prepared to answer when winter asks you what you did in the summer.”

We use only fresh pickling cucumbers sorted by size and cut to the favorite spears, slices or whole. We can other vegetables like red beets and gardiniera mix.

We also make salsa and marinara sauces with either Merlot and basil or Cabernet-Sauvignon with garlic, as well as barrel-aged sauerkraut.

We plan to add more products in the future.

I will also present  my blog design and writing services in an app Emma Blogs format coming soon.

Let me know what you would like to see in this big marketplace by emailing me at emmapalova@yahoo.com

Or you can comment on any of the sites of Emma Blogs. These are:

I am looking forward to this new venture.

My memoir “Greenwich Meridian” is dedicated to my mother Ella Konecny of Big Rapids, Michigan. Out of the entire immigration saga now spanning three generations, she was the one who suffered the most.

“Immigration is a lot of give and take,” she said in an interview in Venice, Florida in March.

Today as she celebrates her birthday, I recall the summer birthdays of the past in former Czechoslovakia.

After returning from Texas on presidential amnesty in 1973, we spent most of our summers at grandparents’ old house in Vizovice, region of Moravia in former Czechoslovakia. The old dwelling was called a “chalupa,” which has nothing to do with the Mexican food.

“I wanted to go home to help my parents,” mom said in a recent interview in Venice, Florida.

Mom was working at the pharmacy in then regional capital Gottwaldov, while we were living the country life on the streets of Vizovice. At first I wasn’t too happy about leaving behind the American lifestyle.

Back in Hawkins, we had a car, dad’s university apartment, and a coke machine at the Junior High School. I was not only on the honor roll, but also on the basketball and softball teams. I played the flute at the time, later the clarinet. I had dreams bigger than this world.

Coming home to Czechoslovakia was a shock. I couldn’t name the months of the year in Czech, I didn’t know Russian or geometry. So, mom entered me in seventh grade instead of eighth at the local 1st through 9th grade school in Stipa.

The school in comparison to USA was very strict and a lot more difficult. I thought the teachers were mean. My aunt and classroom teacher Martha had to tutor me.

But, I loved the summer breaks at the “chalupa” in Vizovice. By the time August rolled around, I was tanned and hardened by the streets. We spent all our time on street Krnovska in Vizovice playing whatever and with who ever was available.

I started a street club with friend Zdena who was the treasurer. I remember exploring along the banks of the river Lutoninka. The river had a weir, and for many years we swam in its cold waters. My grandpa Joseph poached on the river catching fish with his bare hands.

Every year when August 23rd approached, grandma Anna gave me a 20-crown bill, usually late in the afternoon.

“Go and buy a gift for your mother,” she said. “It’s her birthday.”

I grabbed the money and proudly marched into town passed the tobacco/jewelry shop close to the grade school. I’ve always loved window shopping. In awe, I admired the crystal glasses and other famous Czech crystal and garnets.

Sometimes, I would just walk into the shop and buy a newspaper and linger around so I could smell the tobacco. Therein are the origins of my love for newspapers.

When I finally made it across the bridge to the general store called “U Kaluzu” ( “By the puddle,” ) I was fascinated by all the merchandise.

The store pitched atop the river bank had everything.

Many decades later, I was surprised to find a small organizer sewing basket at my parents’ condo in Venice.

“Mom you still have this?” I asked. “I got this for you ages ago in Vizovice.”

I embarked on this journey through my memories called “Greenwich Meridian where East meets West” on December 12, 2012 after being asked by many colleagues, friends and acquaintances to write  our story.
I have attempted several times to pen our immigration saga now spanning three generations. I saved evidence of such attempts like the personal essay, “Fire on Water.” I used the same title for my novel based on the communist experience from former Czechoslovakia. Some trace elements of the story can be found in a newspaper article about my naturalization as a U.S. citizen in 1999, “Lowell woman gets naturalized.” It was syndicated by the Associated Press and well received by the audience. I got phone calls from all over Michigan.
Finally, I decided to pursue my lifelong dream of writing for the pleasure of others. Until recently I have been writing mostly for information capturing tragedies, disasters, events, politics and corrupt police chiefs or superintendents. However, my forte are human interest stories often about ordinary people doing unusual things either by their own will or against it. The memoir is a true work of creative non-fiction in which I combine real life exotic settings like Africa with real life people, who are either put in a bizarre situation or get into one by their own doings.
Today, on this Mothers Day, I dedicate the book to my mother Ella Konecny who suffered the most in immigration because as Mr. Jan Skvor said at a Czechoslovak Conference for Arts and Science in Emigration in Horgen, Switzerland, 1970.
“Immigration is not for missies.”
For me immigration has been one of the toughest things I’ve ever done in my entire life. And that includes studying calculus, seeing my grandparents through their illness to the end and living by myself with two young children, so I could leave the country to join my husband. And now by writing about it, I am reliving it. But, I want to preserve some of the events, and to a certain point even history.
I have no regrets. America has helped me realize my dream of writing. I would do it all over again. I have a Daruma doll used by Japanese businessmen for motivation and to stay on task. One of my former editors gave it to me when I was facing a tough project. When things are not going your way, you just knock it down. A little steel ball at the bottom makes it bounce back.  You also color only one eye, and once the project is complete you color the other eye. So, Daruma has been watching me pounding away on my keyboard at early morning hours chapter after chapter.

“Life went by so fast,” said mom when we talked about immigration in Venice, Florida and at the Selby Gardens.

I completed a 50-page book proposal for Greenwich Meridian to an agent yesterday May 9th , on my birthday. This article contains some excerpts from the overview of the project.
Copyright © 2013 story  and photo by Emma Palova

Watch for the story about King Milling renovations in @The Lowell Ledger.
#moraviansonsdistillery Happy Easter 2022. Vesele Velikonoce prejeme vsem pratelum z USA v Lowell, Michigan.
Hard at work.
Check out this week's episodes of "For the Love of Books Podcast" with host Emma Palova. Listen in for a chance to win a signed copy of your next favorite read signed by amazing indie authors. Go to http://emmapalova123.podbean.com or wherever you get your podcasts. Become a guest and or a sponsor of the show. PM Emma. Share with your friends.
Hello to all,
Happy Holidays 2021