Lowell, MI-Tonight we will be setting up for a whole new different adventure. We decided to team up with my daughter-in-law Maranda with our new ventures: my book “Shifting Sands Short Stories” and her entertainment innovation for kids, Little Dreamers Sleepovers. What is probably most interesting is the location. We will be at venue no. 1 on the greater Christmas through Lowell tour. And that is the Red Barn Market. This is the 26th year for the tour. 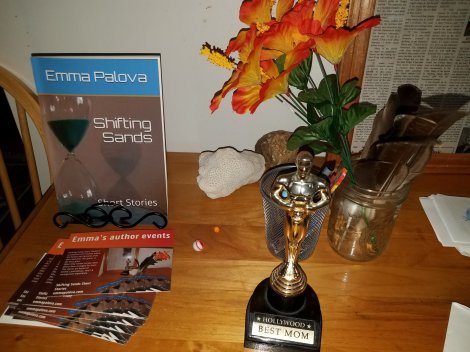 We will actually be located inside a renovated barn with space heaters. There will be a total of 20 plus vendors ranging from Paisley Productions to wood signs. The Red Barn Market is a popular hangout spot for all ages. I live 2.3 miles from it. We’re practically Neighbors.  For a complete list of vendors go to Red Barn Market- Ice Cream and Fresh Produce facebook page at https://www.facebook.com/redbarnmkt/

“This is our biggest event yet,” said general manager Barb Kropf-Roth.

There will also be another author Glad Fletcher with memoir “My Garden of Stones.”

There are close to 100 stops on the tour that attracts people from all over Michigan. I personally like the variety of vendors and businesses on the tour. This includes the city of Lowell and outlaying areas in both townships.

Not your regular kids’ entertainment

Excerpts from the interview for Greenwich Meridian-continued.

All my parents Ella and Vaclav ever wanted was to have enough money to buy a small car, so they could drive from Brno to visit with my grandparents in former socialist Czechoslovakia. At the time, with their rookie wages fresh out of school, that was a utopia. So my dad, a physicist,  took an advantage of a teaching opportunity in Africa in 1964.  The plan was just to make money for that coveted small car, and to add to some savings for an apartment, in a country with chronic shortage of housing.
“I was ready for the opportunity,” Vaclav said. “The politics were beginning to loosen up.”
Dad already spoke fluent English, and he had a deep desire to expand his knowledge of mathematics.
And the opportunity in Africa turned into the best years of their lives. That is until Prague Spring came along with Soviet invasion in 1968, and put a hamper on many people’s dreams of freedom.
Following is an excerpt from an interview with my parents in Venice, Florida on March 5th, 2013. It tracks the beginnings of the immigration.

Emma: Why did you decide to leave Czechoslovakia?
Dad: Because of the Soviet occupation. There was a legitimate fear that the country would be annexed to the Soviet Union.
Mom: My friends were leaving the country crossing the border on foot with just a suitcase in their hands.
Emma: How did you find out about the Soviet occupation?
Dad: From radio BBC and from colleagues at school.
Mom: I was back home in Carlsbad  on a spa treatment. I went to the colonnade and people were crying. They were listening to the radio, and there were big demonstrations. People were knocking down statues. There was no telephone connection. I had to spend extra three days because the roads were closed. Then I took a detour bus through Shumava to Brno.
Emma: What was you reaction to the Soviet occupation?
Dad: We were discussing it with colleagues in Africa. Many of them talked about immigrating to Canada.
Mom: I did not want to leave my parents, my country.
Emma: How did the transition to Canada come about?
Dad: In 1970, a colleague helped me land a post-doctorate fellowship at the University of Saskatchewan in Saskatoon.
Mom: We flew out of Vienna to Montreal and then to Saskatoon. We had tourist visa. But our exit visa were only valid until the end of the year.
Emma: What happened after that?
Dad: I worked on research for the university. I applied for several jobs in Toronto, but it just didn’t work out. So, I found an ad for a teaching job in Texas, and had a telephone interview. I sent out 20 applications.
Mom: You went to school, and we all took tutoring in English.
Emma: How did we end up in Hawkins, Texas?
Dad: Well I took the first offer, which was from Jarvis Christian College in Texas.
Mom: I had no choice but to go with your dad. We got a letter from Czech officials that we have to return by March 31. Your dad did not want to go back. I threatened that I would return home. For two years I lived in limbo.
Emma:  What was the biggest surprise when you arrived in Texas?
Mom: We had no idea that a college could be in a small town. It was a shock, that I will never forget. Hawkins had population of 800.
Emma: What were the repercussions for the immigration?
Mom: We were tried in absencio in Brno. Your dad received a two-year sentence. I received a year and a half for illegally leaving. Grandma went to the trial.
Emma: What were your reactions to the sentencing?
Dad: That I would never go back to Czechoslovakia.
Mom: I cried and cried. I wasn’t a criminal. I always wanted to go back home.
Emma: If it wasn’t for the Soviet occupation, would you have left the country?
Dad: Probably not. I would have gone to another university to gain more expertise, and to make some money.
Mom: Never.
Emma: Now, forty years later; do you have any regrets?
Dad: No. I have achieved my professional goals.
Mom:  Living in a foreign country is not easy. But, USA was the best choice for immigration.
Emma: How has the immigration changed you as a person?
Dad: I have gained great expertise.
Mom:  I got used to living here. But I feel like I was hurled out of the Czech society. I feel split between the two countries.
Emma: Is there camaraderie among fellow countrymen in immigration?
Mom: Any solidarity between Czechs, whether in immigration or at home, disintegrated with the fall of communism.
Emma: What do you miss the most?
Dad: Nothing now. My parents and friends have passed, and the entire country has changed.
Mom: I feel guilty not being able to help my own parents. I shed a lot of tears. In life, you always trade something for something. It all turned out for the better.
Emma: What kind of character attributes do you need to “make it” in immigration?
Dad: You have to pursue things. Be humble, go with the flow, and learn from others.
Mom: You have to fit in the best way you can. We were taught to obey, and to listen.

Thank you, mom and dad.
Emma

This story is one of three installments about the interview with my parents for memoir “Greenwich Meridian where East meets West.”  Previous installments were published on March 10 and March 13.